Inside Basel Geneva is America’s premier watch collector event series sponsored by WatchTime Magazine. The event, which showcases only Swiss manufacturers, brings the top timepieces from Basel and Geneva to aficionados in North America. Collectors are given an inside look at a broad selection of watches and key new models from the Basel and SIHH watch fairs that will not be available in stores for months to come.

WatchTime‘s IBG watch collector Event is held once a year in four different cities across America: New York, San Francisco, Los Angeles, and Chicago. The series features the best of Swiss watchmaking – exclusive to those who manufacture their own timepieces. Carl F. Bucherer has been honored to be selected for display at the IBG Event for the past 9 years.

This year at Inside Basel Geneva Carl F. Bucherer was excited to showcase the Manero Tourbillon and the expansion of the Patravi ScubaTec line, which was launched at BASELWORLD 2014. At last year‘s IBG events, Carl F. Bucherer revealed the Patravi ScubaTec to the public for the first time, and it was incredibly well-received.   It is no surprise that the new white dial and two-tone versions revealed at the 2014 IBG event were equally as popular.  The new Manero Tourbillon featuring a black dial was also showcased, receiving acclaim by event attendees. 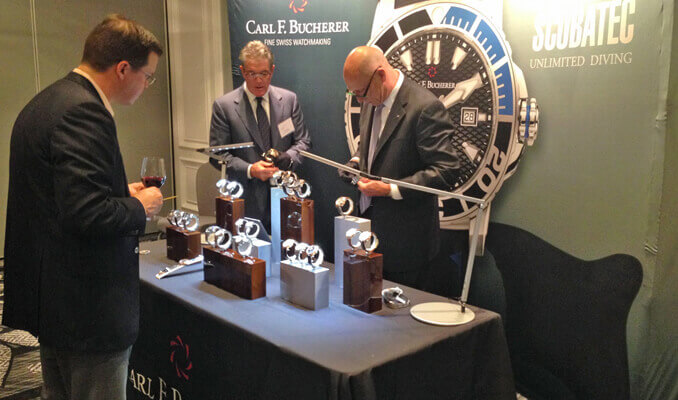 Following the conclusion of the event, guests received a gift bag from 'WatchTime Magazine' which included information from each participating brand.  This year, as an extra benefit to attendees, Carl F. Bucherer raffled off the Patravi ScubaTec model with the black dial and rubber strap. Each attendee received a mail in form to be submitted for a drawing on October 22, hosted by Dominik Grau, Managing Director & Publisher of 'WatchTime Magazine.' The lucky winner of the Patravi ScubaTec was Mr. Richard Euler from Alabama, an avid watch collector and fan.