The Manero AutoDate from the Lucerne watch Manufacture of Carl F. Bucherer was awarded the title of “Best Classical Watch” at this year’s annual “Middle East Premier Awards for Watches, Jewellery and Pens” in the Kingdom of Bahrain.

Since 2005, the "Middle East Premier Awards for Watches, Jewellery and Pens" has been considered one of the most prestigious distinctions in the watch and jewelry sector. The award ceremony, conducted by the magazine "Arabian Watches & Jewellery"(AWJ), is held at the start of the "Jewellery Arabia Exhibition" in Bahrain each year. This year's ceremony took place at the luxurious Hotel Ritz Carlton in the Kingdom of Bahrain on November 19, 2013. Over 300 guests, including royalty, officials, celebrities, diplomats, journalists and watch and jewelry experts were invited to attend this glittering gala event. The award for Carl F. Bucherer was presented by Sheikh Mohamed Bin Abdulla Al Khalifa. The chairman of Arabian Exhibition Management is an expert in the watch and jewelry trade in this region and a great watch enthusiast. 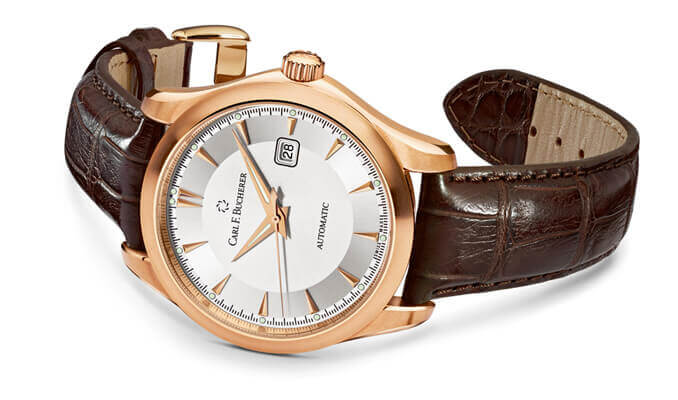 Outstandingly classical
A total of 532 watches had been nominated in ten categories. In the "Best Classical Watch" category, the Manero AutoDate by Carl F. Bucherer was crowned the winner, outperforming other renowned brands. This is not surprising, as the Manero AutoDate has a particularly classical appearance. This vintage-look three-hand watch has a captivatingly harmonious design in 1960s style. Its classical, unfussy appearance emphasizes the functionality of the chronograph, with its major functions apparent at a glance: the current time and date. The Manero AutoDate was created for all those who prefer simple, classical elegance, while attaching value to authenticity.

Carl F. Bucherer watches managed an excellent second place in two other categories: the Alacria RoyalRose in the category "Best High-End Jewelled Watch" and the Patravi ScubaTec in the "Best Sports Watch" category.